The £ 20,000 lighting scheme for…Dancing under the Stars…

Twinkling stars in a dark blue ceiling will be one feature of the new Ilford Palais when it opens next week. They form part of a massive £20,000 lighting scheme which will add colour and gaiety to dancers’ evening.

But first let’s retrace our steps a little. “Why  “new” Palais?” some folk  will ask. “Isn’t it the same old building redecorated ? ”

It is more than that. The old building was stripped to its shell and only the brickwork and roof of the dance area remain. In front, a new foyer remain with offices and catering suite have been built. And at the bandstand end a new extension has been added to the house two club rooms, of which more later. Even in the main hall the tawdry, dust-gathering, fussy 1920’s style of decoration has been swept away. Two new side balconies are put up and the general style of decor is now a blend of West End Wimpy bar and Regent Street Christmas decoration. 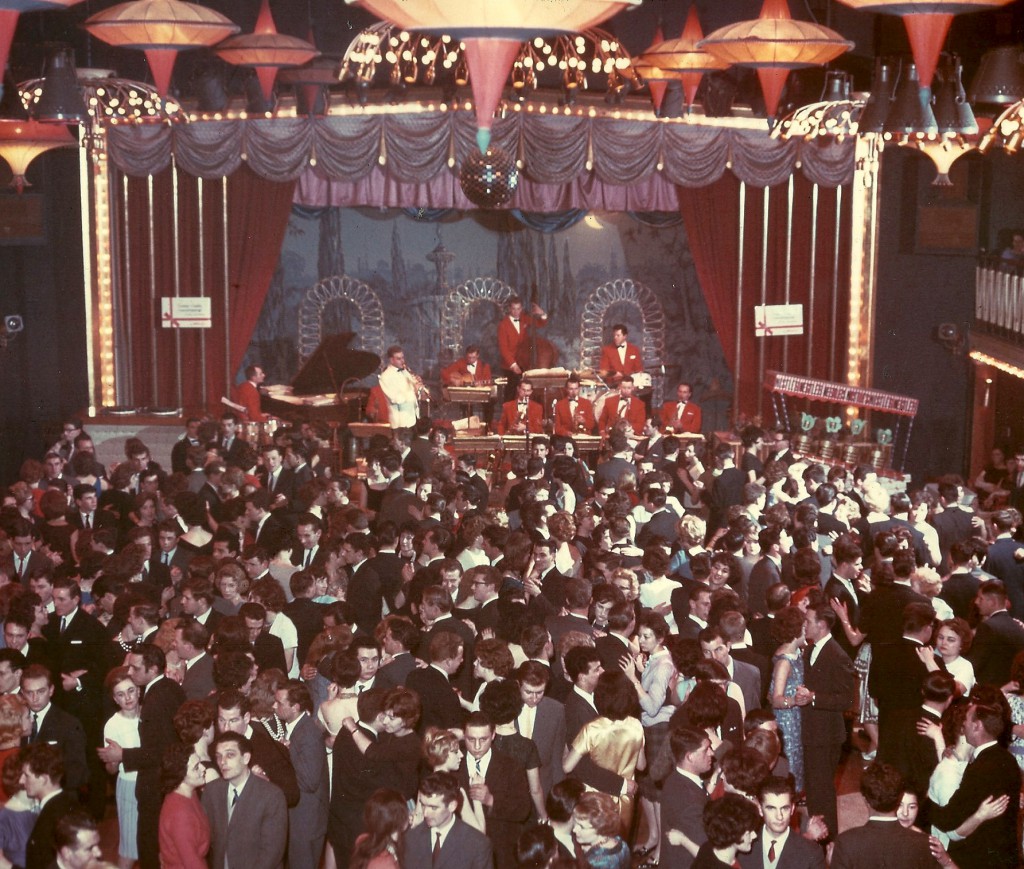 Spent a year on plans.

Before the old building closed in the Spring, local architect Kett & Neve had spent more than a year on the plans for conversion, plans which were amended several times in order to take more facilities and incorporate the latest in design. Indeed, the whole project showed a tendency to emulate Topsy – it just growed and growed.

With carpenters, electricians, and builders still slaving away in the last-minute rush to get everything completed in time for opening I went all over the new Palais with manager  Barre Foster a few days ago. His own office is a vast improvement on its predecessor and has an adjacent reception suite which can be used as a committee room by organisations hiring the building.

The new kitchens were full of the latest equipment and even before coming into operation spotlessly clean. They will serve a large buffet which will have such things as infra-red grills on its counter and be able to offer a wide variety of snacks. and there will be a separate milk bar.

Maybe these things are usually kept secret – I don’t know- but the suite of rooms which come under the heading Ladies are quite something. An elegant powder room is one, and there’s another with black tiling and pink basins and other fitments, if you follow me.

The Gents have to make do with white porcelain and mahogany but their department is equally luxurious with electric shavers and shoe brushes.

The new feature, the club extension, consists of two rooms. The first is the TudorRoom, an amusing mock-up of old-world beams and accessories. It leads to the even more fanciful Cupid Room with a little bar shaped and decorated like a wedding cake and all sort of whimsies around the walls. The whole thing is redolent of Billy Butlin’s holiday camps and it should add to the gaiety of an evening out.

For those whose main interest is in the dancing, the floor area will be relieved by the extra seating accommodation on the side balconies. No  longer will couples near the edge be in danger of treading on the toes on the onlookers. But it is lighting which will set the mood – lighting in the form of banks of coloured floods and spots, ornate hanging pieces and the hundreds of tiny stars in the roof which can twinkle, fast or slow, on demand.

It will all be controlled from a small room on the first balcony. In there is one of the most modern  stage lighting control boards which allows the operator to have everything literally at his finger tips.

though Mr. Foster’s return  as manager represents an element of continuity, there will be noticeable change in the atmosphere to those who knew the old Palais. the policy will provide for more ballroom dancing and less rock ‘n’ roll.

It may, indeed be symptomatic that the new building will be officially opened at a by-invitation-only ball next week and I note from my invitation card that the dress for the evening will be “Black Tie”.